The Winning Attitude to Sweepstakes – Part 3

I did some more photo ops including Johnny Rutherford, the same Indy Car winner in 1976 and some of the other drivers. Johnny was driving the pace car for the race and as a promotion I got to sit in the Chevy Silverado while it was being driven around the race track in front of the pace car for two laps. The conversation I had with Johnny was another highlight and memory for sure. Part of our conversation was about him winning the race and he ask me about winning the truck. He was floored when I told him that I had won another truck several years ago. 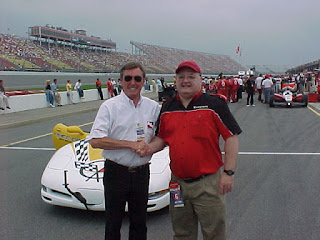 Now for the sad part of that day. Firestone, Chevy and the Indy League gave us access to one of the private box suites just above the pit area of the Michigan Speedway. Wow, there were the best possible seats and it was catered. I got to meet some very interesting people some of whom I call them my friends to this day. I also had my cell phone with me and called my mom, dad, friends and a lady friend. I say lady friend because we didn’t see much of each other but did have a close feeling towards each other. When I called, something was very wrong in her voice. It was her father. She said his illness turned grave. It’s not hard to understand how emotions can change after this.

Eighth rule about having a winning attitude: There was a quote by the late football coach, Vince Lombardi who said: "Winning isn't everything, it's the only thing." This I agree with in a single event. However, there are times when there are more important things in life than winning.

I ask the marketing people however many people entered the Firestone sweepstakes. They said over 365,000. Then I had the one in five to win the truck. Then the Hyundai Santa Fe Sweepstakes, there was over 100,000 entries. Then we can add in all the other great prizes I won at the time of the Firestone win and you come up with odds that are too astronomical to even to think about, in the billions. Considering all this happened to one person, me.

Before I had left the racetrack I started to ask the question, “Why Me?” Out of the 300 million people living in the US at the time, why did this happen to me? I still cannot comprehend to this day the “Why Me” 13 years later.

Ninth rule about having a winning attitude: Even when the odds of winning seem insoluble, impossible, or insurmountable and even crazy to think, all you need is that one number to make the difference. “It only takes once”.

The worse part of the “Why Me”, I started to develop the realization that this also applies about something I mentioned earlier. This was the comments about “Luck” and “Unlucky”.  There were parts of my life where fate and destiny wasn’t my friend. Then I had people seriously calling me the “Luckiest person on earth”. At times it seemed that one bad thing that happened to me was offset by something good happened. Then in 2007 my mother, Patsy McDaniel died suddenly. Then Dad, Robert McDaniel died in 2009. These events changed my affected thinking again.

Tenth rule about having a winning attitude: “I would trade all of my so-called “Good Luck” that has happened in my life for all the “Bad Luck” without question or hesitation. When you can honestly ask yourself this question then you know what the definition of “Luck” is.

I could share many more stories of events that happened but the odds would be considered nearly impossible. Some of these stories are funny to the point of being hilarious while there was one I could just easy say I shouldn’t be alive and got down to inches. Last, there was one event that happened that was greater than the odds of winning two trucks but I will stand with my beliefs to the day I die.  The important point here is to things in life that shouldn’t for all practical reasons happen, but they do.